What Should I Do When My Man Tells Me Cholesterol is Borderline: Part 2 of a Women's Guide To Men's Health 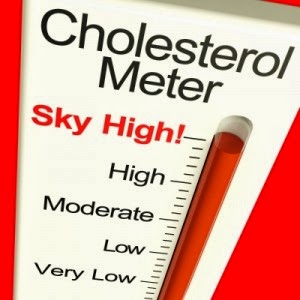 Between Obamacare and insurance discounts for having a "check up," more and more men are having some kind of preventative physical examination and blood tests done.  Although severe problems are occasionally found, most adverse findings are more of the "you need to watch that buddy" variety.   Borderline blood pressures, liver enzymes and cholesterol readings are common findings during a check up.  Appropriate follow up on all of these issues is important, the evidence of how to proceed weak, and the official guidelines a bit fuzzy.  Trying to figure out how to appropriately manage the "not quite bad enough bit of bad medical news" is an major part of my practice and an significant part of men's health.  I want to start talking about cholesterol first because the new guidelines have generated an inordinate amount of confusion among patients and doctors.

Before starting, its important to note that the men with 'borderline cholesterol' I am talking about here are men who are at "average" risk for heart disease.  If your man is diabetic, a smoker, or has known coronary artery disease might need treatment even for with what may appear to be pretty good cholesterol numbers.  African American men are also at higher risk for cardiac disease at any given cholesterol level.  Even those who are not at increased risk have a lot to think about: new guidelines may add up to 13 million new people to the ranks of those taking cholesterol medications.  Many of those added would be men in late middle age and older.  Healthy men, particularly as they round 50, need to understand their individual cholesterol risks and try to figure out the right way to manage it.

What is it? So let's start with cholesterol itself.  When you see the "total cholesterol" number what you are really seeing is a combination of the good cholesterol (HDL), the bad cholesterol (LDL) and fat in the blood (triglycerides).  Ultimately, the only number that really counts for heart disease and stroke risk is the LDL, or bad cholesterol.  And this number only counts when it is a "fasting" number: not eating for at least 12 hours prior to the test.  Eating causes a brief surge in the cholesterol that makes interoperation of the number difficult.

There is a drop dead number (literally) for LDL cholesterol.  That number is 190.  The latest guidelines pretty much say that if your LDL is 190 or more, you need medication therapy: no ifs, ands, or buts. Having said that, if your 35 year significant other has an  LDL of 195 and is 30 pounds overweight, I am often willing to give him a chance to lose some weight first.  The important thing is not to keep dragging out the decision to treat forever: if he doesn't lose the weight and the cholesterol doesn't come down in a reasonable amount of time, then the drug trigger must be pulled.

When is it dangerous? The problem of course, is that "borderline" is a slippery slope.  The new cholesterol guidelines generally recommend medical treatment when the risk for a cardiac event in the next 10 years is more than 7.5%  The number is based on sex, age, smoking status, race, blood pressure and whether the person has diabetes or not.  And while you can't change your sex or your race, some preventable risk factors are way more important than cholesterol.  Qutting smoking is a lowers your risk for a future heart attack way more than controlling your cholesterol.  Its worth losing the war on french fries if it means no smoking.   As a general rule, younger, non-hypertensive, non-diabetic, non-smokers can worry about "borderline" cholesterol numbers less.

When should I be concerned? As men age, the chances of getting a heart attack increase and the importance of "borderline" cholesterol numbers becomes more important.   Anyone who is a smoker, has hypertension, or is a diabetic needs to take a good look at medication before going on the "I'll lose a few pounds" route.  Controlling these factors often means not needed cholesterol medication.  Try not to have the man in your life be the "next year" guy: if the cholesterol isn't improving and he's failed at the exercise/weight loss: increases the risk:  draw a "medication" treatment line in the sand.

What are the possible treatments? At some point in the future, I will have a giant discussion on all of the various cholesterol reducing meds out there and why they may (or may not) work.  Medical therapy primarily consists of statin medications such as Lipitor or Crestor.  Although traditionally diet therapy consists of low fat-low cholesterol foods, I encourage weight loss using any diet to lower cholesterol.  The less you are, the less your cholesterol is!

Many men with what is thought of as "borderline cholesterol" do not need treatment with medication, but they should be carefully monitored and need to watch their weights.